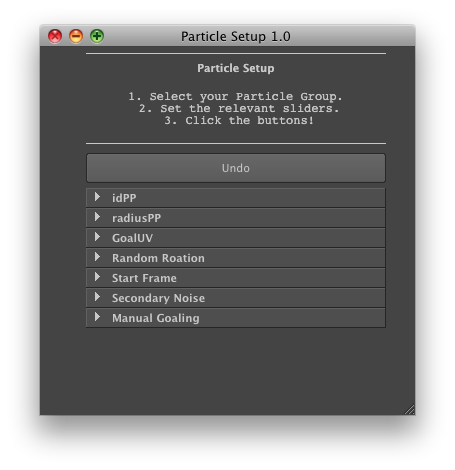 A wee script that automates a bunch of the tasks I find myself doing over and over again with particles (plus a couple of toys just for fun).
CreativeCrash won't let me bin the first image above, it's an old version, ignore it.

Usage:
Select your particles (nParticles or old-school particles) and click the buttons. Particle Setup will create a bunch of attributes and hook them up to scripts.
Features:
The interface will recover any previously set values, just select the particle transform before opening the interface.
All changes are live, just keep your particles selected, generally there will be no need to edit the scripts, just move the sliders or edit the 'Extra Attributes' Particle Setup creates on the particleShape node.
Attributes are animatable.
idPP: random id for particle instances.
radiusPP: random (or not) scale for particles. Weighting will make more small particles then large (using a gaus function). It's good for dust, sand, soil and things such as that. When this option is enabled Radius Max will control the standard deviation.
GoalUV: sets up random goalUVs for when using goals.
Random Rotation: Adds random creation rotation for particles and, if needed, drifting rotation for animation (independent XYZ controls).
Start Frame: Random start frame, useful when using model sequences as instances.
And a couple of toys which you may or may not find useful:
Secondary Noise: Cool noise (dNoise) for particles. It effectively organises the particles into 3d currents, but can also be used for swarming effects.
Particle Trails: Leave particle breadcrumbs everywhere your hero particles go. Select a particle group (also works with curve flows) and click the button. Be aware, turn your emitter right down otherwise you'll end up with thousands of particles created every frame. Adjust the step size to change the density of the particle trail. See video below.
Manual Goaling: Just for fun, staggered goaling, set up manually for full control, be warned, it's slow!
Manual goaling will require your scripting know-how to create more then one goal. You need to uncomment the Manual goaling interface code in the script in order to use this feature, as it's most certainly only for people who know their mel.

Remember to set the "Instancer Replacement (Geometry)" menus on the particleShape node to the attributes created by Particle Setup.
Particle trail example: https://dl.dropbox.com/u/64466186/trails_h264.mov - in this example there are 5 hero particles, and the trail particles live for 1 second. Gravity is off!

Let me know if you have any problems.

1.1 - Added Particle Trails. Hidden Manual Goaling (uncomment in the script to use it).
1.0.3 - Fixed a bug that stopped radiusPP working with old particles and nParticles that weren't set to 'balls'.
1.0.2 - Added a 'weighting' option to radiusPP (which will result in more small particles then large ones).
1.0.1 - Fixed a bug that prevented the script from running in Maya 2010 and below.
1.0 - Initial release.

Show all 46 people who favorited this item