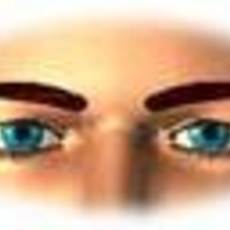 When animating emotion, a reliance on only facial animation will have little substance if it is not combined with the relevant posture of the body. The attitude of the body should support the expression on the face (Figure 14-1, 14-2 and 14-3).

Figure 14-2 Happiness is expressed through a combination of bright eyes, upturned corners of the mouth, raised eyebrows, a lively stride, straight back, and raised shoulders and arms.

Figure 14-3 A coy demeanor can be displayed by biting down on the lower lip, casting eyes downward, bending the neck and keeping the limbs close to the body.

Normally, the facial expression will show up first, which is then followed by the movement of the body. The two occurrences are only fractions of a second apart, but nevertheless should be animated in that order. For example, if the person perceives something, the eyes are the first to move, followed by the turn of the head, then the shoulders and finally the rest of the body.

Although the posture of the body reflects the mood on the face, this discussion will focus solely on the drama of facial expressions. One of the most important aspects of facial animation is that the combination of various head muscles convey emotion. Even though one has to model the various expressions as single occurrences, it is the assemblage of these, during the animation process, that yields the appropriate emotional state. Most of the facial muscles, animated singly, bring about only a mild drama.

The muscles of the face are close to the skin and reciprocally connected. One has only to close one eye and observe the upward movement in the corner of the mouth to see this.

These often use sliding buttons which can generate various percentages of each facial movement. If the eye, mouth, nose, eyebrows, jaw, and so on movements are modeled separately, one can achieve a diversity of expressions and phonetic shapes for speech. Since the muscles on the left and right side of the face vary in strength, some of the features are modeled as separate left and right shapes. When modeling the following expressions, a hand held mirror becomes an indispensable tool.

Although the human face is capable of hundreds of expressions, one can model approximately three dozen basic features to achieve most countenances. Each of these have been divided into the following separate group; brows, eyes, nose, mouth, and jaw.