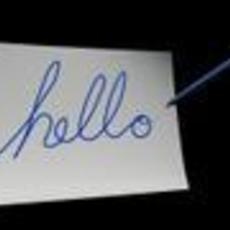 It is relatively easy to animate a line of written text, but it can be tricky to exactly track the pencil point to the line as it writes without resorting to lots of keyframes. The following technique allows the pencil to automatically lock to the end of the emerging paint effects line.

Here is a Maya7.0 file with a simple completed scene:

2. Write the desired text onto the paper backwards(1 stroke). If you don't like writing backwards you can write forwards but then use "Reverse Curve Direction" on the stroke's path curve. (the path curve is initially hidden... to show it select the stroke and then do "Display: Show Geometry: Stroke Path Curves") Alternately the curve could be modeled as curve on surface, followed by "paint effects: attach brush to curves". Just make sure the first cv of the curve is at the end of the text.

3. Select the stroke and do "Paint effects: Curve utilities: Simplify stroke path curves". This helps smooth out jiggles, especially if you are awkward with a mouse like me( a tablet works better). Repeat for extra smooth curves with fewer cvs. One can also then edit the stroke path curves more easily to fix the shape.

4. Position your pen such that the tip touches the origin (0,0,0), then do "Modify: Freeze Transformations". Also position the pivot at the origin (insert key)... this makes it easier to rotate the pen as it writes.

5. Enter the following mel string substituting the names of your paint effects stroke and pen object:

This positions your pen to the position of the first point in the stroke( which will be the end, because we reversed the strokes direction in step 2 ) The current points and normals for paint effects strokes are available as an output array on the stroke node (the outPoint and outNormal attributes).

6. Keyframe the minClip attribute on the stroke to animate the stroke. The pen should be locked at the end of the stroke and move with it.

7. If desired you can make the stroke thin at the leading edge by editing the pressureScale ramp on the stroke.

Note that this does not work well if you use a textured or complex pfx stroke, because the texture will move along the stroke as it grows. One can create the stroke forward instead of backwards, then animate the maxClip in which case textures will work. However it is then a little more complicated to position the pencil at the stroke end.
Page 1 of 1