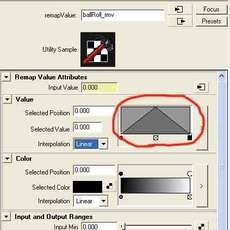 This tutorial will demonstrate how to setup foot roll for a character using remapValue utility node. I came across the need for this kind of setup when there was constant demand from animators of the project I am working on, in which they wanted control over when the toe roll gets triggered.(If the foot roll was a value from 0 to 10 then they wanted the toe pivot to rotate during a random foot roll value(between 0 and 10)).So I had to think of a setup different from the conventional setup of set driven keys.Below is the step by step procedure for setting up the adaptable foot roll using remapValue nodes.

Create two remapValue utility nodes using the render utilities window or by running the command createNode  remapValue in the Script Editor.Rename first remap value as ballRoll_rmv and the second as toeRoll_rmv.