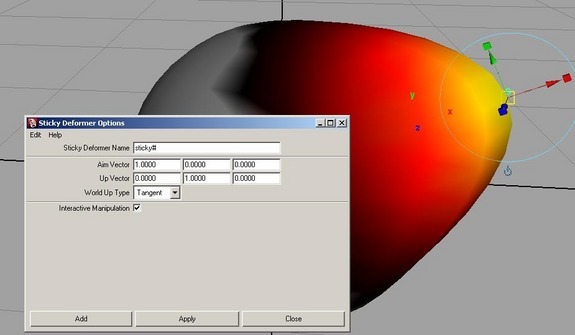 This script create a deformer ( based on the softMod deformer ) sticky on the surface of an object.

The sticky works on meshes, nurbsCurves and nurbsSurfaces. More than one deformer can be created on an object, stacked up the ones on the others.

In interactive mode, the sticky transform above the deformer`s handle can be slide on the deformed surface.

When the deformer handle is selected, hit the t key and then change the fallof of the deformer with the b+middle mouse button, with a pickwalkUp, you can select the deformer`s hook and slide it on the surface, pickwalkDown and change the deformation ( this tool is based on a softMod, so it can be painted, the falloff curve can be edited in the attributeEditor, etc....)

Be carefull, the 1.0 version of this tool is not an animation tool, the interpolation of the sticky transform is done in uv space and the result could be unpredictable...However, if the sliding feature is not used, you can animate all the deformer`s handle attributes ( transforms, envelop, fallof, etc ) as usual.

We use mainly this tool to correct problems (self collision etc ) after cloth solving, by tweaking the result and updating  the corresponding cached frame on disk, but this tool can be used for modeling purpose too.

The sticky deformer can be used above a skinCluster too, to correct elbow/knee/shoulder deformation`s for example while following the skinCluster`s deformations.

put the .mel files in the Maya script path ( C:Documents and SettingsuserNameMy Documentsmaya8.0scripts )

source these files, or restart Maya.

select a vtx / cv on your object

set the option and hit apply

a new stickyDeformer is created on your object.You can move the handle to deform your object hit t then b+mmb to change the fallof. If the deformer has been created with interactive option, hit pickWalkUp to select the deformer`s hook, and slide it, each time you released the mouse, the u, v and face index are updated automatically with the attached callBack.