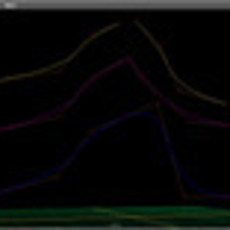 Tutorials > Modeling > Nurbs
Understanding Continuity
admin, added 2006-09-13 12:42:36 UTC 30,352 views  Rating: (0 ratings)
0 Comments
Like
Page 1 of 1
Continuity applies to both curves and surfaces. It simply refers to how two curves meet at a point, or how surfaces meet at an edge. When using a patch-modeling approach, where a character, vehicle or whatever are modeled from a series of patches, like a quilt, one wants to avoid visible seams between the individual patches.

Above we have 3 sets of 2 curves which are on colored layers. The top two yellow curves do not have any continuity at all. The middle two pink curves have positional continuity, meaning that their end points are exactly on top of each other. This will result in a hard edge between surfaces, which is sometimes desired. The bottom two blue curves have both positional and tangential continuity. To verify this one must look at the 'hulls'. Notice that the hulls create a straight line as we transition from one curve to the other. With 3rd degree curves/surfaces, we look one vertex in from the end/edge on each side of the connection point.

Above we have two surfaces meeting at an edge. To maintain both positional and tangential continuity while deformed, the surfaces have matching parameterization/spans along the edge where they meet. Also, the hulls show us that straight lines are visible as we transition from one surface to the other. This is important to avoid breaks at the seam. While all deformers can break seams even when they are modeled as described, the 'stitch' tools can fix the breaks if the surfaces are modeled in this fashion.

So what we are looking at above is how one can modify the edge where two surfaces meet without breaking their continuity. If one selects a minimum of four vertices between the two surfaces, specifically the two points where they touch, and one vertex in from the edge on each surface, as long as we move/rotate/scale those 4 points as a unit, the edge will not lose its continuity. Therefore, if these points were in a cluster, for example, they must all have the same weight value to avoid breaks in continuity.