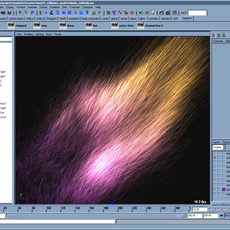 There are situations where a phenomenon's velocity or speed is related to it's behavior or appearance. Perhaps the incandecence increases as a particle moves faster... or the color changes from blue to red. Perhaps some dust is resting on an object, but once it gets blown away it also begins to dissipate and fade. These effects can be achieved by understanding how to reference particle speed, which is not a default particle attribute.

Attributes related to speed which particles do have by default are velocity and acceleration. It is important to understand these for they can cause confusion for those new to this terminology. Everyone knows what speed is... we are reminded to be aware of it whenever we get in a car. Speed is a 'float' number which tells us how fast we are moving. Velocity and acceleration, however, are 'vectors', which not only tell us magnitude but also direction. A velocity of <<0,10,0>> tells us that a particle is moving in the positive Y direction with a speed of 10 units per second. An acceleration of <<0,10,0>> tells us that a particle is speeding up in the positive Y direction. Thus when trying to determine a particle's speed, our focus is on the velocity, not the acceleration.

With this in mind, there are a couple ways we could query a particle's speed: custom variables or custom attributes. For example, assuming we have a particle object, particleShape1, which has the rgbPP attribute, we could write the following runtime expression:


float $speed = mag(particleShape1.velocity);
if ($speed > 5)
particleShape1.rgbPP = sphrand(1);
else
particleShape1.rgbPP = rand(<<.2,.4,.6>>,<<.2,.5,1>>);
The above expression will give us bluish particles unless they start moving faster than 5 units/second at which point they would become rainbow colored. We defined a new variable called $speed which was assigned the magnitude of the velocity vector. The mag() function returns the magnitude of any vector by taking the square root of x2+y2+z2. So the magnitude of velocity is speed, which is useful when the directionality is not needed. An example where directionality is used would be:

So custom variables have their place, as do expressions, but what if you want to color particles based on speed by using a color ramp. This is a case where we will need to define speed as a custom attribute.

With general knowledge of the particle engine in Maya, one should be aware that there are many attributes which a particle shape node can have, but does not by default: radiusPP, goalU, spriteNumPP, etc. These attributes serve specific purposes when added, yet we are also able to add 'custom' attributes to particle objects which do not serve any purpose when created. Their functionality is determined by the user by assigning them values to store, which other attributes may reference.

So we want to create an attribute called 'speed'. With the particleShape node selected and the attribute editor open, in the Add Dynamic Attributes folder, click the general button. This opens the Add Attribute window which has three tabs. Select the left tab. In the name field enter 'speed', for attribute type choose 'float', Per Particle Array. With the attribute created, you will now see it listed in the Per Particle Array Attributes folder of the particleShape node.

We chose PP Array because we want each particle to have its own speed attribute... as any particle's speed will likely be different from any other. Now that each particle has 'speed', we need to assign it a value. We want to write a runtime expression as this is an attribute whose value changes over time:

particleShape1.opacityPP = particleShape1.speed;
would have the effect of getting particles to fade out when they stop moving. Although this relationship works well, it is not very complex. If you need particles to fade on when they begin moving but fade out when they reach a certain speed, a ramp may be the most efficient technique to design the relationship between opacity and speed. Likewise, if we want color to change based on speed, ramps are going to be our friend.

Something you should know is that ramps are commonly connected to attributes such as rgbPP, opacityPP and radiusPP based on a particle's lifespan. This means that a particle's 'Age' determines where in the ramp the particle's attribute gets its value from. Well, what we want to do is not base the query on 'Age' but on 'Speed'.

With 'rgbPP' and 'speed' already added to the particle object, right click on rgbPP in the Per Particle folder and go to the creation dialog window for Create Ramp. By default Input U is mapped 'none', and Input V is mapped to 'Age'. Change Input V to 'Speed'. As you can see, any per particle attributes which you have added will appear in this list.

At this point we have accomplished our goal to relate speed to a color ramp, but there are still a couple things left to do to get the right results. The obvious first thing to do is to edit the ramp with the required colors; perhaps blue at the bottom and red at the top. If you playback your scene, the particles will no doubt be using a color from the ramp, but the relationship of speed to the ramp will not necessarily be evident. This is because the ramp V positions go from 0 at the bottom to 1 at the top... but our particle speed attribute does not necessarily go from 0 to 1. But this is not to say that it can't. We simply need to edit the runtime expression for 'speed':

particleShape1.speed = mag(particleShape1.velocity)/$topspeed;
where $topspeed is a guesstimate of the top speed that any particle in the particle object will hit. It is not necessary to be completely accurate, as it makes little difference if only 50% of the color ramp is being used. Once $topspeed has been deduced, the effect should be clear, assuming that the particle's speed -is- changing.

At this point there is an optional step which can be taking to increase the variety within the particle color (or whatever attribute you are relating to speed). Based on our current ramp set-up, all particles travelling the same speed will be the same color. This is because all particles are using the left most edge of our ramp (U = 0). What can be done is to add some variation to the ramp, using any technique available with Maya Textures (noise, color gain, etc), then have each particle use a different U coordinate along the ramp.

Add a new attribute to the particleShape node called 'rand_u'. Then write the following creation expression to assign a random number to this new attribute:

particleShape1.rand_u = rand(0,1);
Where we previously had assigned 'Input U' to 'none' when we created the ramp, we now want 'Input U' to be mapped to the 'rand_u' attribute, while 'Input V' is still mapped to 'speed'. To change the mappings after a ramp has already been created, it is easiest disconnect/reconnect the ramp by right clicking on the attribute in the Per Particle Array Attributes folder.

So that about wraps it up... while there are many ways to incorporate this topic into an effect, below is a simple case where a turbulence field creates sudden speed changes which in turn are causing color shifts.