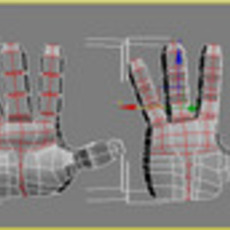 The vertices denoted by blue dots in figure 15 are then collapsed together on one side, and then the other, to get rid of the two triangles(shown in green) created by the connect function. The result is shown in figure 16.

After the edges have been connected with a new edge loop, the triangles are collapsed in the same way. See figure 18.

The next step is to add some more detail to the fingers. To do this, select a horizontal edge in the middle of each finger and hit the ring button. The result is three diferent edge rings selected, going vertically along the contours of the hand. See figure 19.

Switch to vertex mode and select the vertices shown in figure 21.

Use the conect tool to connect them together. See figure 22.

Collapse the vertices shown in blue, in figure 22. This will get rid of the triangles created by the connect tool(shown in green). The result of collapsed triangles, is shown in figure 23.

It's time to add a more natural transition between the 3 fingers. Select the four edges between the three fingers, as shown in figure 25.

Use the chamfer tool to chamfer them apart a small distance. See figure 26.

Select the vertices(on both sides of the hand) highlighted in blue in figure 26 and weld them together as shown in figure 27.

Select the edges created in the center by the chamfer and use the connect tool to connect them. Also connect the end of the edge loops to the vertices highlighted in blue in figure 28. Pull the newly created edgeloop down so that it creates a deeper crevice between the fingers. See figure 28.

Select the vertices shown in figure 29 and weld them together. The five sided polygons shown in green can be reduced to four sided polygons that will meshsmooth better in this part of the model. If you have a weld threshold of 10.5 you should be able to weld them all together at once, instead of collapsing the vertices two at a time. This is assuming that the original model was done with the recommended dimensions. See figure 29.

Next, select the polygons highlighted red in figure 30 and scale them down in the local y axis as shown. This will give the joints a more natural look, instead of being sharp creases in the model.

The hand needs a wrist, so the next step is to select the polygons on the bottom of the hand and extrude them down twice as shown in figure 31. Notice how the bottom of the palm below the thumb is curved where it joins at the wrist. Select and move vertices until you have achieved this curvature.

Figure 32 shows the edges on either side of the knuckles selected and scaled down on the local y axis. This gives them a more rounded appearance.

In figure 33, the edges selected near the finger tips are being moved down and inwards to give the finger tips an arched appearance. This is also where one might wish to model in some fingernails, if needed. For simplicity's sake, it is often easier to just model the nail depression and attach seperate nail objects to the mesh after the hand is done.

That's it really, folks! You can always add more detail if you need it, but for a styized creature, this is a good start. The hand model isn't too heavy for animation and it has the basic underlying structure for good deformations. Figure 34 shows the finished model of the hand from the front and back in a wireframe view. Now that you have the correct structure, keep working with the model, until you are happy with the proportions. A four fingered hand isn't much more of a challenge. You'd just start by creating a box with four width segments instead of three, and proceed from there.

I hope that you were able to make to this point. If you have feedback, please send it to me at: nipper@3dluvr.com