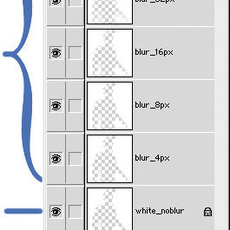 First of all, the composition will need an alpha channel or a key. Since Hank was done in 3D, the raw untouched render and the alpha channel are easily separated by rendering with an alpha (RGBA).
This could have been footage from a camera as well with the alpha obtained by keying out the background through using a luma, chroma, or bluescreen such as Ultimatte or Primatte keys which speed up the process quite a bit. I'll leave that part up to you to figure out since that's a whole turorial in itself, keying is an art and science in itself. Most of the time, the entry level Flame artists at the studio are painting out the garbage in rough chroma keys frame by frame while scrubbing back and forth to make sure there are no dancing edges on the keys.

Next, the key is used to separate the glow layer (in red here for clarity) from the subject of the composition (in this case, it's Hank the singing mechanic). As you can see in the Photoshop layer palette, there is a background, the subject that will be exposed to the glowing backlight, and the first layer that will soon provide the backlight effect that occurs when film is overexposed to light when the subject is in a much dimmer light (in the foreground). This can be seen when you photograph a subject against a very light background (such as shooting someone inside against a brightly lit window or open door).

Next, the glow layers are blurred one on top of each other until there are enough layers to get closer to what you want your end result to look like. Once there are enough blurred layers, adjust the transparencies to your heart's content.

The glow layers are all progressively blurred from 4 pixels to 64 pixels in this composite. Your own values will vary depending on personal preference and image resolution. The layers are then all composited using an additive process.

Photoshop has a screen layer function that works pretty well. Other functions, depending on your compositing software, may include the "add" function which adds the value (RGBA) of each corresponding pixel with the one below it. On higher end composites (such as film), you may have to worry about burning out your whites, but if you have to worry about that, this tutorial is kid's play. :)
The white_noblur layer could have been replaced by having a white background as well
Any adjustments to the image should be done in this composite now that there is a backglow to more accurately judge the levels, hue, saturation, etc.

Once you have everything looking the way you want, save the composite and flatten the image, or render out the sequence (if you're compositing in something like After Effects, Shake, Maya Fusion, Toonz, USAnimation, or whatever compositor you might be using). This technique is pretty much analogous to the way I used to give backlight glows in Toonz (which had NO effects except blurs, level adjustments, color adjustments, and an add function) for digital cel animation production.

Some things to keep in mind at the lighting before rendering is to have a light from behind the subject since it would be strange to have a backglow when the subject isn't lit from behind at all. Plan your scenes while keeping in mind what effects you want in those scenes.