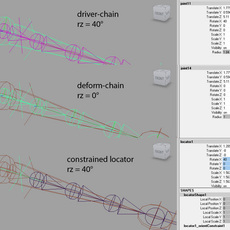 there are a few methods out there creating an upper arm roll, however, none of those methods work in all possible situations, so it's quite normal you will have to switch to one of 2 solutions (like backwards and forward arm or something like this). if you actually animating and come to this area you have a problem...

so for my diploma thesis i came up with the following method i like to share with you.


Hope you liked the Tutorial!