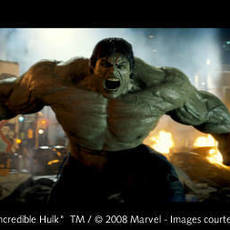 Based on the Marvel Comics superhero created by Stan Lee and Jack Kirby, the movie tells the story of scientist Bruce Banner, who is desperate to find a cure for the radiation that poisoned him and lets loose the rage within him that transforms him into The Hulk. Animators at R&H took advantage of MAXON BodyPaint 3D's speed, agility and intuitive processes to quickly create the complex and dynamic effects necessary to bring the story to life. In all, Rhythm & Hues worked on 234 shots. A team of eight texture artists used MAXON BodyPaint 3D primarily to paint and texture The Hulk and his nemesis, The Abomination, in addition to painting props and portions of buildings and environments.

"We're committed to using the best software that will allow us to quickly and efficiently produce the highest quality texture maps, and BodyPaint 3D is number one," said David Perkins, technical support supervisor at Rhythm & Hues.

R&H features a state-of-the-art production pipeline made up of a balanced mix of proprietary and off-the-shelf software. According to Sarah Kym, a lead texture painter at Rhythm & Hues, a 3D paint and texture package needs to be smart and adaptable, and BodyPaint 3D more than fit the bill. "BodyPaint 3D's tools make us more efficient. Examples include the Clone tool, the ability to hide surfaces to get around tight spots, multiple cameras, and layer effects. It makes me very happy when I see a tool that can cut my paint time in half." Kym, who has also seen an increasing demand for realism and complexity in 3D paint and textures in the past several years, along with an explosion of technology to meet the new challenges, noted, "We're constantly pushing for bigger and better effects and packages like BodyPaint 3D have helped us get to that next level." Additional BodyPaint 3D tools and capabilities deemed particularly useful to the R&H team while working on "The Incredible Hulk" included its extra-large texture map capacity, customizable user interface, Raybrush technology and projection painting.

MAXON BodyPaint 3D's interactive, real-time capabilities proved particularly invaluable to the R&H team when they were faced with creating a wide array of highly complex action shots, including the story's signature metamorphosis of Bruce Banner into The Hulk. For this critical transformation sequence MIG (Muscle Influence Group) maps were created in BodyPaint 3D, enabling lighting specialists and animators to control how the muscles rippled under The Hulk's skin. Kym added, "Every material group had multiple maps with each group to influence small sections of muscle, and they had to match within the material and across other materials. It was a crazy puzzle that had to fit as perfectly as possible so that we didn't end up with weird ridges or bunched-up muscles. I'd load 10 or 15 layers of maps per material group into BodyPaint 3D so that I could visualize how they were lining up, and then seam them or add or subtract them as needed. I was so happy that I could keep loading them in. I kept waiting for BodyPaint 3D to crash, but it didn't!"

Additional key scenes developed with the help of BodyPaint 3D included The Hulk coming under heavy weapons fire and both The Hulk and The Abomination demolishing vehicles. The weapons fire scene required painting different types of "damage" onto The Hulk's body - including wounds, dirt and scrapes. Aaron Skillman, a lead texture painter at Rhythm & Hues, explained, "Using BodyPaint 3D I could project all the reference maps for where the damage needed to be on the model and then paint/project the damage onto the areas of the body where it would normally be difficult to paint, such as the elbow, heel, and side of the torso." Crafting the destruction of a Hummvee and motorcycle was equally challenging, "These 3D props were complex and highly detailed," Skillman noted. "BodyPaint 3D handled the textures and all the maps necessary to paint them in the detail and in the 4K resolution we needed for these scenes."

MAXON BodyPaint 3D has been an integral part of the R&H production pipeline for the past 18 months, and Hulk served as an important steppingstone in the artist team familiarization and adoption of the product. The studio is currently using BodyPaint 3D on several upcoming films, including Mummy 3, They Came from Upstairs, The Fast and the Furious 4 and Land of the Lost. R&H is currently evaluating MAXON's leading 3D animation software, CINEMA 4D, and Projection Man - a tool that makes it fast and easy to create digital environments.

About Rhythm & Hues
One of the world's leading producers of visual effects and animation for movies and commercials, Rhythm & Hues, founded in 1987, has contributed to more than 115 feature films, including Babe, which won an Oscar in 1995 for Best Visual Effects. The studio is also the recipient of three Scientific and Technical Academy Awards. Recent productions include Alvin & the Chipmunks, Evan Almighty and Night at the Museum. Currently in production at Rhythm & Hues are The Mummy: Tomb of the Dragon Emperor, They Came from Upstairs, Cirque du Freak, Land of the Lost, State of Play, and The Time Traveler's Wife. More info at www.rhythm.com.

All trademarks contained herein are the property of their respective owners. About MAXON Computer
MAXON Computer is the developer of professional 3D modeling, painting, animation and rendering solutions. Its award-winning products have been used extensively in the film, television, science, architecture, engineering and other industries. MAXON products have been used for and in The Golden Compass, Beowulf, all three Spider-Man films, Surf's Up, Fantastic Four: Rise of the Silver Surfer, Ghost Rider, Open Season, all three Pirates of the Caribbean films, Monster House, Eragon, Superman Returns, The Chronicles of Narnia: The Lion, the Witch, and the Wardrobe, Serenity, War of the Worlds, Polar Express, The Flight of the Phoenix, Van Helsing, King Arthur, Star Wars: Episode II - The Attack of the Clones, the On-Air Packages for TMZ T.V., Comedy Central, Monday Night Football, Jeopardy, Wheel of Fortune, ESPN, NFL Network, TiVO, NBC, DirecTV, CBS NFL, Smart House, Fox and many more. MAXON has offices in Friedrichsdorf (Germany), Newbury Park (CA, USA), Bedford (UK), Tokyo (JP) and Paris (FR).