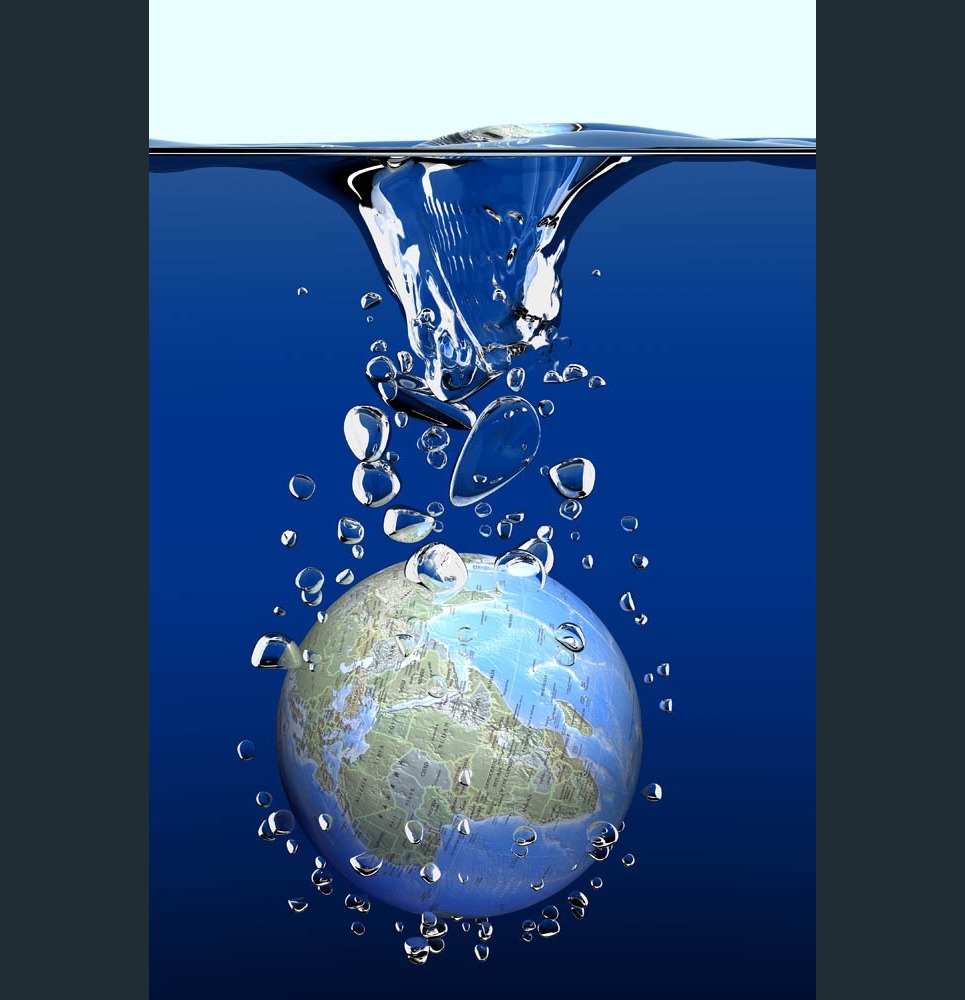 The idea here is to drop a globe into aquarium to symbolize the final and ultimate end to global warming. I also considered sinking the actual planet in the image, but that wouldnt have been realistic The borders on the map also have a meaning: some world leaders still seem to think that we dont have to do anything because you dont do anything, so borders are part of the problem.


I have written a short making of about the image: Making of Sinking Earth. Copied below:

Sometimes
ideas just pop into my head this image was definitely one of those.
Once I had the idea, I really felt I needed to create the image. This
is a short making of for the image.

Here the idea is to drop a globe into aquarium to symbolize the
final and ultimate end to global warming. I also considered sinking the
actual planet in the image, but that wouldnt have been realistic The
borders on the map also have a meaning: some world leaders still seem
to think that we dont have to do anything because you dont do
anything, so borders are part of the problem.

I use Maya and mental ray for my 3D images. This scene was very
simply to model: a sphere, background plates (flat planes), couple of
reflection cards (flat planes), water and bubbles.

Water was originally a nurbs surface that I sculpted to look
like the globe had just been dropped. I then converted the surface to
polygons and added some detail in the depressed area. Finally I added
front and back planes, so I could have the camera outside the
aquarium. Having camera outside the water was important for getting
the materials working correctly (see below).

Bubbles were a little tricky to get the way I wanted. I first tried
particles and particle replacement (with random scaling and rotation
for each bubble), but I didnt like the results. I then started adding
the bubbles manually. I first distorted a subdiv sphere, then placed it
where I wanted. Next I duplicated, moved, rotated and scaled the bubble
to get the next one. This was repeated couple of times. Then I grouped
all the bubbles and duplicated the group. Now I could transform the
whole group, which speeded up the process. I again repeated the
duplication couple of times. I could also select all the bubbles inside
a group and rotate all of them. This changed the look of the group
quickly (because bubbles were not symmetrical).

Well, what can I say.. its a nurbs sphere. There is even a button
to make one in Maya :-p . Textures are from the CIA. (Yes, seriously,
CIA has published and placed in public domain some great looking maps.
These were downloaded from http://www.lib.utexas.edu/maps/world.html.
I combined a geographical and political map to get the final map. The
projection isnt perfect cylinderical mapping, but I simply chose a
view that didnt show anything odd (like a huge white spot the size of
Europe).

Materials for water and bubbles are almost identical: mental ray
dielectric with all colors set to pure white. The only difference is in
ior. In mr rays know in which material they are currently traveling.
The ray ior is set initially to 1.0. When a ray from camera enters
water it has ior of 1.0, so the material has to have ior set to 1.33
(or something like that). Likewise, when the ray enters a bubble it has
the ior of water (1.33), so the bubble material has to have ior of 1.0
(ior of air). When a ray exits a material mr uses out_ior to set the
current ior.

I use quite a lot reflection cards with highly reflective and
refractive objects. The idea is to replace lights with self
illuminating objects. Reflection cards work with standard ray tracing
and final gathering, but to get direct or indirect illumination you
would need real lights. I also use many ref card materials all having
different incandescence. This makes it easy to tweak brightness of each
reflection. In this scene the background has colored blend, but
otherwise its just a standard ref card.

The globe is lit by three directional lights, two super whites
(brightness about 1.2 -1.6) from top & behind and one dark blue
from below (no shadows for any lights).

The first step in lighting the scene was naturally deciding what
kind of look I wanted. I experimented with various looks before finding
the right one. Finally I chose a bright studio look with perfectly
white highlights and high saturation. I used relatively low resolution
(something like 500 x 750), mr Min Sample Level set to -2 and Max
Sample Level set to -1 or 0 to get pretty fast full scene preview
renders. Reflection and refraction limits were set to 8, as was Max
Trace Depth.

The bubbles needed a lot of white to look good, so I placed large ref cards behind the blended backgroud and on both sides.

BTW: if you want to learn how to light photographic studio scenes
like this, there is a wonderful book called Light: Science and Magic
(link to amazon below). The book is about real world photography, but
its very useful for 3D stuff also.