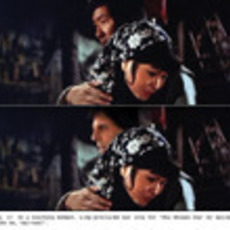 THE STAGE IS SET

After a family is suddenly murdered while enjoying an intimate dinner in their home, Master "Betty" Pain and his evil henchmen realize their work is not yet finished. They approach a crib and inside it, an infant known only as �The Chosen One�, is cooing innocently. Master Pain approaches the crib and marvels at his discovery. His smile fades as he slowly draws a huge knife from the sheath at his side and raises it above the infant. In a flash, the knife lunges down only to be abruptly stopped by the infant�s tiny hand. This baby is unusually strong with a firm grasp on Master Pain�s wrist which cannot break free. Suddenly, little booties appear and in a blur, Master Pain is kicked numerous times in the face. The infant springs from his crib and proceeds to wreak martial arts havoc, displaying amazing acrobatics and fighting prowess. Flipping through the air, running up walls, rolling on the floor, could this mere baby be a DNA clone of Van Damme himself, with possibly the Three Stooges thrown in to give him personality? Master Pain is not deterred by this show and he proceeds to lash wildly at the infant who deftly and playfully ducks his every move. Master Pain�s confidence turns to frustration as a near miss swipe of his sword results in the Chosen One�s diaper to be cut off and fall to his feet. In typical baby fashion, a urine spray showers Master Pain and all the Chosen One can do is giggle. The baby escapes, Master pain burns down the home and so begins this 80 minute quest by The Chosen One to avenge the deaths of his family. Welcome to �Kung Pow - Enter the Fist�.

As you can see from my introduction, this wacky story is a far call from high art and is especially not your typical effects driven film. But, it is a spoof with many contemporary references which promises to make you laugh and display a wide range of effects trickery that is impressive artistically, technically and in its scope.

"Kung Pow" is the brain child of Steve Oedekerk, who serves as the writer, director, producer and star of the film (he plays The Chosen One). The film was released by Twentieth Century Fox last year and has since garnered shining reviews for its effects, especially for the computer generated baby fight sequence at the beginning of the film and the �Matrix�-like Kung Fu showdown Oedekerk has with a CG cow.

Chris Watts, Visual Effects Supervisor and Betsy Paterson, Digital Effects Supervisor of Dubbed Films Visual Effects, helmed the bulk of effects work for this film, which features over 2,000 effects shots. To their credit, this film was an enormous undertaking and showcases some fine character animation and CGI compositing, but also a large amount of �invisible� live action compositing as well. It is this meticulous work that a talented and tireless artistic team of compositors, painters and rotoscopers worked for many months to complete. I was a lead compositor on that team and I�d like to give you a demo on one of these shots.