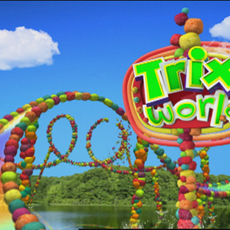 Were seeing an increased client demand to provide the best creative solutions from start to completion, explains David Gioiella, Mr. Wonderful Partner. An all-encompassing workflow allows us to really invest in the final project, and follow the creative vision from selecting the right director to putting polishes on the final composites.

Mr. Wonderful took a very classy and clean design approach to the new Real Sports open, one that complements the straightforward personality of this critically acclaimed show, says Tripp Dixon, HBO Sports Creative Director. From a live-action standpoint, the city panorama they shot and composited is a innovative and integral part of the new set.

We wanted to elevate the production quality of the open while adding a very strong sense of design, explains Damien Henderson, Mr. Wonderful Executive Producer. This is a 60-minute news show that goes beyond traditional sports reporting. We focused on maintaining the integrity of its serious journalistic content so we kept our design away from any stock or generic sports footage.

Composer/Mixer Ted Gannon composed a remixed version of the shows signature music track, and provided over 18 minutes of original music for the package. He also handled sound design.

Mr. Wonderful are my go-to guys on a project like this, says Pat Giles, Saatchi & Saatchi SVP & Creative Director. They have such a wide range of skills and talent pool that we were mixing, animating, compositing, editing with them and feeling like each skill was extremely specialized. They are a surprising group up there because they are not just one-stop shopping for convenience, they really have the chops, AND they offer a consistency through a lot of different functions. But mostly, when I needed to do a Roller Coaster made out of cereal, they were the guys I thought of first. That says a lot!

"Collaborating with Mr. Wonderful again was quite a brilliant experience, adds Hafeez Saheed, Saatchi & Saatchi Producer. Their ability to be immersed and address from prep to finish really contributed to the entirely smooth production process.

Given that so many elements of spots are interconnected now, and given the reality of trying to maximize resources and budgets, having a single team see the project from start to finish makes more and more sense, concludes Gioiella.